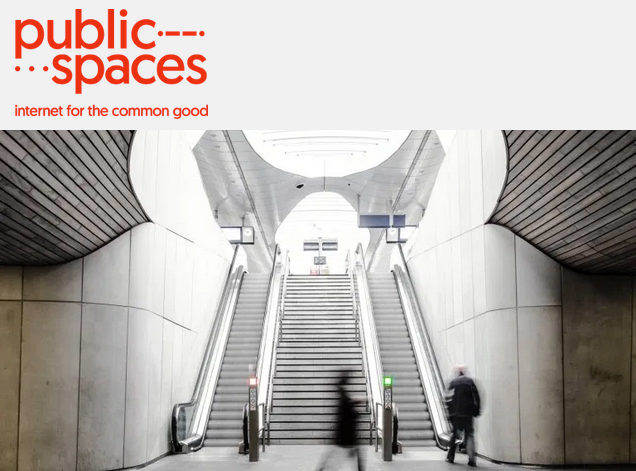 The internet has enormous potential to be a force for public good, with many initiatives working to create an open, inclusive and trustworthy network. PublicSpaces.net and BBC Research and Development have worked together to organise this one day conference at MozFest House during Mozilla Foundation’s week-long open internet festival.

It will explore ways in which we could make a new internet that strengthens the public domain and deliver public value online, in line with PublicSpaces commitment to providing an ecosystem of alternative digital tools that serve the common interest and does not seek profit.

It’s high time to introduce this dynamic initiative out of the Netherlands. PublicSpaces.net was initiated by Geert-Jan Bogaerts, Head of Digital Media at the Dutch PSM VPRO. It entered the public arena with its Manifesto, published on 28 June 2018 and updated in September 2019. The coalition behind it includes other Dutch PSM, CHI like the Nederlands Instituut voor Beeld en Geluid, film festivals and CSO like Waag and Wikimedia Netherlands. It is

“a coalition to design a new platform for social interaction, where users are not viewed as exploitable assets or data sources, but as equal partners that share a common public interest.”

In July 2018, the PublicSpaces Foundation was set up, assisted by a Board of Advisors. This is intended as an interim structure for kickstarting the actual project. The aim of the Foundation is

“to investigate and develop a concept and a prototype for a connecting, autonomous, online public platform in a way that prioritizes the public interest and serves no commercial or political goals, as well as the possible operation of such a platform.”

PublicSpace sees itself as a movement rather than an organization. But it does require some organizational structure that is still in the making. One of the next steps will be to make it work internationally.

In September 2018, it was decided that PublicSpace envisions itself as provider of a set of middleware software components, that connect low-level infrastructural services (such as ActivityPub and X-API) and concrete end-user platforms. A first prioritized list of components PublicSpaces would need to provide in order to achieve its goals was drafted. This post warns against expectations of PublicSpace becoming the GAFA-dragon-slayer, at least not anywhere soon.

“Our approach implies that PublicSpaces will not start working immediately to provide an alternative to Facebook or Instagram or Snapchat. For the time being, the audience at large will not be able to access a PublicSpaces platform as such, but they will be able to access platforms ‘powered by’ PublicSpaces. However, in the longer run, depending on how things work out, it is very well possible that we will start building a PublicSpaces social network, with a lot of the functionality that people are used to in current popular social platforms.”

The next milestone at the end of January 2019 turned the first component wish-list into the Development bucket list. It defines seven categories of functionalities with a number of criteria for each to eventually be a part of the PublicSpaces ecosystem of components. It includes the first steps of the Roadmap already travelled:

Also in January, PublicSpaces won the Incentive Prize of the Dutch Privacy Awards. In March, the project reported on networking activities in the US, with a presence at SxSW in Austin, Texas, and a promising cooperation building with Ethan Zuckerman’s Center for Civic Media at the MIT Medialab in Boston – the first one to resign over the Epstein funding case. Also in Europe networking intensified. PublicSpaces was present at CPH-DOX, the documentary festival in Copenhagen, at ORF in Vienna and at the EBU Media Summit in Porto and it built political contacts, both in Brussels and in The Hague.. The STRP-festival in April 2019 in Eindhoven provided opportunity for more public presentations and a workshop of the PublicSpaces coalition.

Next is the day-long event at MozFest event. The day after a PublicSpaces R&D coalition will form for applying for funding in order to take the project to the next level.